On September 4, 2019, Alex Thomas of The Southington High School robotics Team 195 presented the Sons of Italy with a plaque of appreciation for our continued support of the Southington First Robotics team 195. Alex and the other young engineers

have been gearing up for their upcoming season of robotics competitions. Knowing how this team has performed in the past, They’re looking to dominate another season of competition. Robotics team 195 has earned the respect of being a superpower in these robotics competitions and admired by many other teams worldwide. With approximately 60 students mentored by Dr. Gino Brino and his wife Sandra as well as numerous others, They have made Team 195 a huge success in first robotics.

FIRST robotics is a not-for-profit organization that aims to get students involved in STEM education by holding competitions that  teams from across the world participate in. Team 195 is ranked in the top 3 in the world and mentor many other towns starting a robotics program. They always preach good sportsmanship. 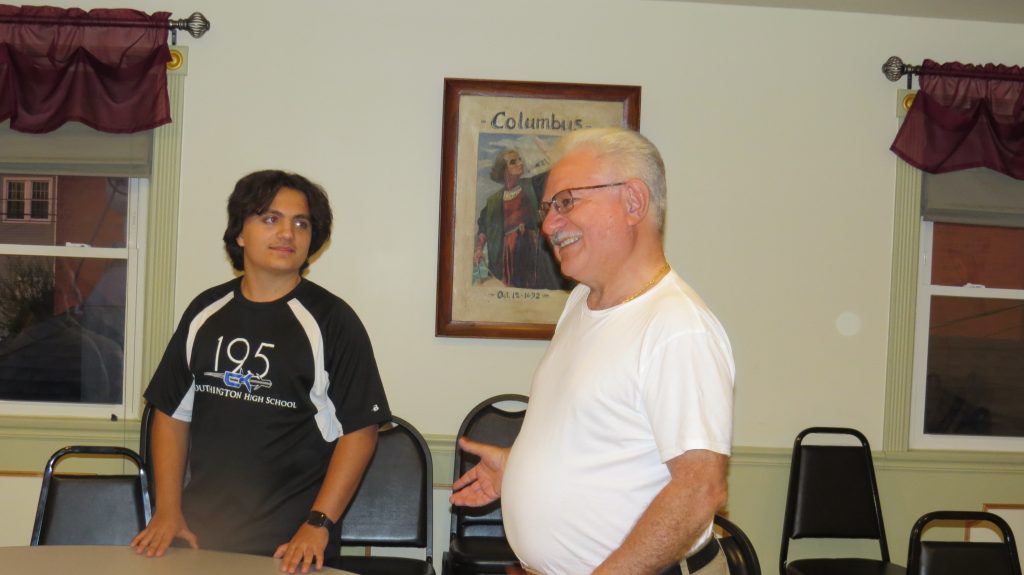 Last years The topic was deep space, and the game involves “refueling” a space ship on a fictional planet. The robots had to maneuver over different surfaces, perform tasks like picking up game pieces, and even maneuver during a “sandstorm” on the planet. Students designed and build their robot in six weeks, all while optimizing it for performance on the game floor.

Alex also explained to the Sons of Italy Membership how the team is preparing for this years competitions as well as how they are training freshmen student new to the robotics team. He further stated the team is looking forward to the announcement of this years competition. His Grandfather and Sons of Italy Member Joseph Dellaporta explained it cost approximately 50,000 a year for the program to continue. He thanked the Sons of Italy for being a contributor to this outstanding program.

The Sons of Italy is honored to be able to support such an outstanding program and wishes them nothing but the best and continued success in this yeas competition.