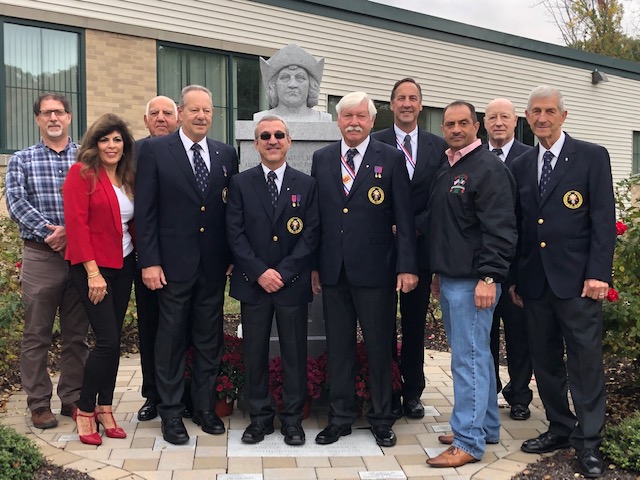 SOUTHINGTON – Members of the Knights of Columbus and town Italian civic organizations gathered at the Christopher Columbus monument outside of the Municipal Center to celebrate Columbus Day.

For participants, the day was not only a celebration of the explorer’s discovery of America in 1492, but also of Italian heritage. The ceremony was held with members of Southington UNICO, the Sons of Italy, Sorelle d’Italia In America and the Southington Knights of Columbus Isabella Council 15. These organizations, along with the Joe & Kay Calvanese Foundation, supported the late Dick Fortunato in his efforts to erect the statue, which was unveiled in 2017.

Tony Cusano, president of the Sons of Italy, said there was a good turnout Monday morning. He said he is proud to be an Italian-American citizen and to be able to continue to celebrate Columbus Day.

“We are a people of peace and while we respect other people’s beliefs we hope that they can respect ours as well,” he said. “Our organizations do a lot of fundraising and charitable work in the community.”

Cusano shared with attendees the history of Columbus Day as a holiday:

“In 1892, for the 400th anniversary of Christopher Columbus’ voyage, following a lynching in New Orleans where a mob had murdered 11 Italian immigrants, President Benjamin Harrison declared Columbus Day as a one-time national celebration,” Cusano said. “The proclamation was part of a wider effort after the lynching incident to placate Italian-Americans and ease diplomatic tensions with Italy.

“During the anniversary in 1892, teachers, preachers, poets and politicians used rituals to teach patriotism. These rituals took themes such as citizenship boundaries, the importance of loyalty to the nation and the celebration of societal progress. Included among them was the Pledge of Allegiance.

“Many Italian-Americans observe Columbus Day as a celebration of their heritage and the first such celebration was held in New York City on Oct. 12 1866. The first statewide holiday was proclaimed by Colorado Governor Jesse F. McDonald in 1905 and it was made a statutory holiday in 1907.

“In 1934, as a result of lobbying by the Knights of Columbus and New York City Italian leader Generoso Pope, Congress passed a statute stating ‘The president is requested each year to issue a proclamation designating Oct. 12 as Columbus Day, calling on United States government officials to display the flag of the United States on all government buildings on Columbus Day and inviting the people of the United States to observe Columbus Day in schools, churches or other suitable places with appropriate ceremonies that express the public sentiment benefitting the anniversary of the discovery of America.’

“President Franklin Delano Roosevelt responded by making such a proclamation.

“Since 1971, the holiday has been held on the second Monday in October. I am pleased to be celebrating Columbus Day with you this morning for the 529th anniversary.”

Sorelle d’Italia In America President Antonietta Barbato paid tribute Monday to the late Joseph Michael Angelillo by reciting the “Salve Regina” or “Hail Holy Queen” prayer at the ceremony. Angelillo, who died in 2014, was a former Grand Knight of the Knights of Columbus. Each Columbus Day, Angelillo along with Luigi Barbato and Dennis Kelly would recite the prayer.

“Christopher Columbus and his men would recite the prayer every night they were sailing on their ships,” said Antonietta Barbato. “Then, one day, he woke the next morning to sight the New World.”

The prayer was also recited by Father Michael J. McGivney when he founded the Knights of Columbus in 1882. 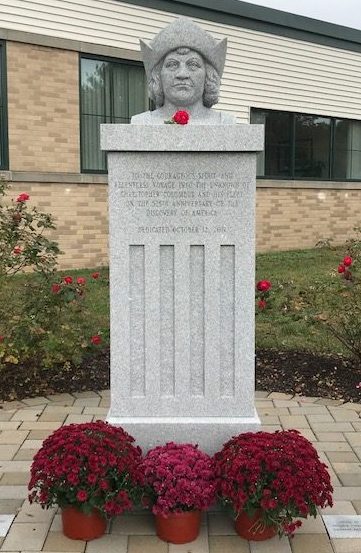